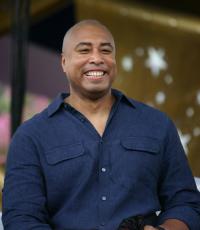 He was the first baseball player to win a batting title, Gold Glove award, and World Series ring in the same year
Fee Range: $20,000 - $30,000
Secure Bernie Williams
for Your Event

Bernie Williams first played in the majors in 1991 after being recruited to the New York Yankees from their Double-A team in Albany.  His breakout year in 1995 led him to 18 home runs along with leading the team in runs, hits, total and stolen bases.

The following year, he was named the ALCS MVP and was a key member in helping the New York Yankees win the 1996 World Series. During the 1998 season, Williams became the first MLB player to win a batting title, Gold Glove award, and World Series ring in the same year. Williams went on to help the Yankees make the playoffs every year from 1999-2005.

He ended his MLB career with a batting average of .297, 2,336 hits, and 287 home runs. He was on four World Series Championship teams, all with the Yankees.

Outside of his professional baseball career, Williams is active within his own philanthropy Little Kids Rock. His organization is a non-profit that works to restore and revitalize music education in disadvantaged U.S. public schools.

Secure Bernie Williams for Your Event

Based on your interest in Bernie Williams as a speaker or for a personal appearance, Direct Sportslink has provided you additional links below for other sports talent with similar appearance fees, speaker topics, and categories that match Bernie Williams.