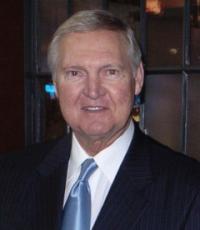 West was a standout at West Virginia University, leading the WVU "Mountaineers" to the 1959 NCAA championship game, earning Most Valuable Player honors. He then embarked on a 14-year career with the Los Angeles Lakers, and was the co-captain of the 1960 U.S. Olympic gold medal team in Rome.

West's NBA career was highly successful. Playing the guard position as a professional, he was voted 12 times into the All-NBA First and Second Teams, was elected into the NBA All-Star Team 14 times, and was chosen as the Most Valuable Player of the All-Star game in 1972, the same year that he won his single NBA championship ring. He is a member of the first four NBA All-Defensive Teams which were introduced when he was 32 years old.

West was enshrined in the Basketball Hall of Fame in 1980 and voted as one of the 50 Greatest Players in NBA history in 1996. His left-handed dribbling silhouette has long been used in the NBA's official logo.

After his playing career, West was coach of the Lakers for three years, leading Los Angeles into the playoffs each year and earning a Western Conference Finals berth once. Working as a player-scout for three years, West was named General Manager of the Lakers prior to the 1982-83 NBA season. Under his reign, Los Angeles won seven championship rings. In 2002, West became general manager of the Memphis Grizzlies and helped the franchise win their first-ever playoff berths. For his contributions, West won the NBA Executive of the Year Award twice, once as a Lakers manager (1995) and then as a Grizzlies manager (2004).

In May of 2011, West joined the Warriors as their head consultant.

Secure Jerry West for Your Event

Based on your interest in Jerry West as a speaker or for a personal appearance, Direct Sportslink has provided you additional links below for other sports talent with similar appearance fees, speaker topics, and categories that match Jerry West.