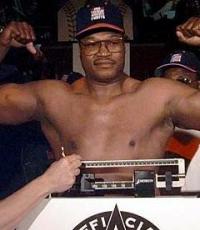 He is a former World Heavyweight Champion; He is considered one of the best boxers in the history of the Heavyweight Division
Fee Range: $10,000 - $20,000
Secure Larry Holmes
for Your Event

Holmes was born in Cuthbert, Georgia, but he has spent the majority of his life living in Easton, Pennsylvania, from which he gained his boxing nickname, "The Easton Assassin."

In October 1980, Muhammad Ali came out of retirement to face Holmes. Ali was a shadow of his former self, and Holmes dominated the fight. Ali's trainer, Angelo Dundee, stopped the fight after the tenth round. Holmes successfully defended the WBC belt 17 times until December 11, 1983, when he voluntarily relinquished that title for the championship of the new International Boxing Federation. Many fans attribute the IBF's early survival to Holmes' involvement as its first heavyweight champion.

By the time he had his first loss to Michael Spinks, he was almost 36 years old. Holmes' lack of popularity is attributed to him being the direct successor to Muhammad Ali, one of the most accomplished and most loved heavyweight champions of all time.

Holmes is regarded as having one of, if not the, greatest left jabs in heavyweight boxing history.

Secure Larry Holmes for Your Event

Based on your interest in Larry Holmes as a speaker or for a personal appearance, Direct Sportslink has provided you additional links below for other sports talent with similar appearance fees, speaker topics, and categories that match Larry Holmes.