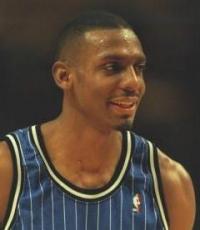 Hardaway grew up playing basketball in Memphis for Treadwell High School, where he averaged 36.6 points, 10.1 rebounds, 6.2 assists, 3.9 steals, and 2.8 blocks as a senior and was named Parade Magazine National High School player of the year. He finished his high school career with 3,039 points. Hardaway then committed to Memphis State University (known as the University of Memphis since 1994).

Hardaway was named to the All-NBA Rookie Team and was the MVP of the Schick Rookie Game in 1994. In '95 he led his team, the Orlando Magic, to the NBA Finals. He was twice named to the All-NBA first team (1995 & 1996), and won Olympic gold with team USA in the 1996 Summer games. He was a four-time All-Star during his NBA career.

Secure Penny Hardaway for Your Event

Based on your interest in Penny Hardaway as a speaker or for a personal appearance, Direct Sportslink has provided you additional links below for other sports talent with similar appearance fees, speaker topics, and categories that match Penny Hardaway.