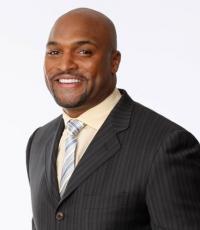 He is one of the most popular New York Giants former players; He was a starting wide receiver for the Giants Super Bowl Champion XLII team
Fee Range: $5,000 - $10,000
Secure Amani Toomer
for Your Event

Amani Toomer attended the University of Michigan. As a junior in 1994, he became only the third player in school history, after Jack Clancy and Desmond Howard, to post 1,000 receiving yards in a season, finishing with 54 receptions for 1,096 yards and six touchdowns; he was named to the All-Big Ten Conference First Team. His senior year in 1995, Toomer caught 44 passes for 758 yards and seven scores and was voted to the All-Big Ten Second Team.

He was drafted by the New York Giants in the second round of the 1996 NFL Draft. He played for the Giants from 1996-2008. He was the starting wide receiver for the Super Bowl Champion Giants in Super Bowl XLII.

Secure Amani Toomer for Your Event

Based on your interest in Amani Toomer as a speaker or for a personal appearance, Direct Sportslink has provided you additional links below for other sports talent with similar appearance fees, speaker topics, and categories that match Amani Toomer.