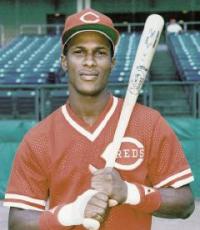 He helped lead the Cincinnati Reds to a World Series sweey of the Oakland A's in 1990; He is well known for surviving cancer and playing professional baseball at the same time
Fee Range: $5,000 - $10,000
Secure Eric Davis
for Your Event

Davis is a former center fielder for several Major League Baseball teams, most remembered for the years he spent with the Cincinnati Reds.

When Davis first appeared in 1984, his physical talents gave him the potential to be one of the most exciting players in the game. He was a rare five-tool player with home-run power as well as sheer speed on the basepaths. He made a habit of robbing home runs and elicited comparisons to Willie Mays.

One of Davis' most famous moments was when Davis homered off Oakland A's Dave Stewart in his first World Series at bat in 1990. The home run triggered a World Series sweep for the Cincinnati Reds.

In May of 1997, Davis was devastated to learn that he had colon cancer. He vowed to return that season, although most felt that it would be unlikely that he could recover in time. By September, while he was still in treatment, Davis returned to the team. His cancer treatment left him tired but he worked hard to regain his form. Davis was well-enough to hammer a game winning home run in the 1997 American League Championship Series. After the season, he was given the Roberto Clemente Award. He serves as an honorary board member of the Multiple Myeloma Research Foundation.

Davis was brought back for 1998 and went on to have one of his best seasons, batting .327 with 28 homers. He also hit in 30 consecutive games that season. His last season would be in 2001.

He accepted a front office position with the Reds in 2010.

Secure Eric Davis for Your Event

Based on your interest in Eric Davis as a speaker or for a personal appearance, Direct Sportslink has provided you additional links below for other sports talent with similar appearance fees, speaker topics, and categories that match Eric Davis.