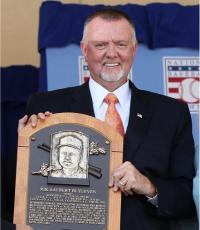 Blyleven was drafted straight out of high school by the Minnesota Twins in the third round in 1969, where after only 21 minor league starts he found himself called up to the Majors at age 19 on June 2, 1970. In his first season, his sharp curveball helped him to ten victories and he was named AL Rookie Pitcher of the Year by The Sporting News. In 1973 he pitched the most shutouts of any AL pitcher, with 9. Blyleven was traded to the Texas Rangers on June 1, 1976. He pitched well with the Rangers, having a 2.76 ERA in his first season and throwing a no-hitter against the California Angels on September 22, 1977, just two weeks after being sidelined with a groin injury. His 2.74 career ERA with the Rangers remains the best in team history.

Blyleven was again traded on December 8, 1977 to the Pittsburgh Pirates as part of the first four-team trade in Major League Baseball history. With the Pirates, he led the team in ERA, strikeouts and complete games in 1978 and helped them to a World Series victory in 1979. He was again traded in 1980 to the Indians.

Blyleven sat out most of the 1982 season with an elbow injury, but came back in 1984 with one of his best seasons: a 19–7 record with a 2.87 ERA. He missed a second 20-win season that year when he was forced to miss a couple of starts after breaking. In 1985 he again led the American League in shutouts with 5. That year he also pitched 293 ⅔ innings and completed 24 games. Blyleven was traded back to the Twins, where he passed the 3,000-strikeout mark and helped the Twins to a 1987 World Series victory.

Secure Bert Blyleven for Your Event

Based on your interest in Bert Blyleven as a speaker or for a personal appearance, Direct Sportslink has provided you additional links below for other sports talent with similar appearance fees, speaker topics, and categories that match Bert Blyleven.