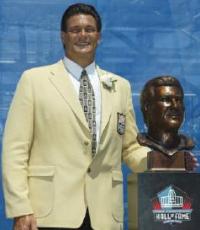 GMI's customers and guests are passionate Chicago sports fans. Direct Sportslink secured several Chicago Bears greats, (Richard Dent and Gary Fencik) along with Dan Hampton for GMI's hospitality events at Soldier Field. As you can see by the photo, everyone had a great time!

Dan Hampton did a great job for us at the PDCA Annual Membership Meeting. He arrived right on time, enjoyed dinner at our President's table, gave a great talk, fielded questions, and stayed afterwards to sign autographs. He helped make it one of the best meetings we've had in years. You were absolutely correct - he was the ideal speaker for our audience. Thank you for all your help.

Hampton was a first-round draft pick of the Chicago Bears in 1979 out of the University of Arkansas. An outstanding and versatile defensive lineman, Hampton would play 12 seasons with the Bears. Six times he earned first or second team All-Pro honors as either a defensive tackle or defensive end.

Nicknamed "Danimal" for his ferocious style of play, Hampton persevered through 10 knee surgeries and numerous other injuries as he became recognized as one of the game's most dedicated players. Hampton was an impact player even as a rookie. In his first season he was credited with 70 tackles, 48 of which were solo efforts, as well as two fumble recoveries, three passes defensed, and two sacks.

In 1980, he led the team in sacks with 11.5 and his 73 tackles were the most by a Bears lineman. His play earned him the first of his four Pro Bowl invitations. In the nine-game strike-shortened 1982 season, Hampton, playing right end, led the Bears with 9 sacks and was second with 71 tackles. One major publication selected him as the NFC Defensive Most Valuable Player and he was also named to his first All-Pro team. Injuries slowed the promising lineman in 1983, but he still managed to record five sacks in just 11 games.

The following season, although he missed one game with a hyper-extended knee, his 11.5 sacks equaled his career best. It's for the 1985 season, however, that Dan and the Bears' defense is best remembered. That year, the stingy Chicago defense allowed just 198 points and shut out both opponents in the NFC playoffs. The Bears went on to destroy the New England Patriots 46-10 in Super Bowl XX, allowing just 123 total yards and sacking Patriot quarterbacks seven times.

Although 1985 may have been a high point in his career, Hampton continued to play at a high level until finally retiring in 1990, becoming just the second Bear to play in three different decades.

Secure Dan Hampton for Your Event

Based on your interest in Dan Hampton as a speaker or for a personal appearance, Direct Sportslink has provided you additional links below for other sports talent with similar appearance fees, speaker topics, and categories that match Dan Hampton.