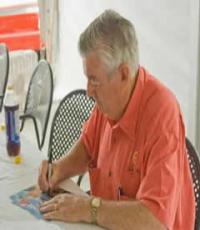 During the course of his career, Bobby Allison accumulated 84 victories, making him third all-time, tied with Darrell Waltrip, including three victories at the Daytona 500 in 1978, 1982 and 1988, where he finished one-two with his son, Davey Allison. He was also the NASCAR Winston Cup Champion in 1983 driving for DiGard Racing. Additionally, Allison ran in the Indianapolis 500 twice.

Allison is one of eight drivers to have won what was then considered a career Grand Slam (an unofficial term) by winning the sport's four majors: the Daytona 500, Winston 500, Coca-Cola 600, and the Southern 500. Richard Petty, David Pearson, Darrell Waltrip, Dale Earnhardt, Jeff Gordon, Jimmie Johnson, and Buddy Baker are others to have accomplished the feat.

Bobby was a car owner for numerous drivers from 1990 to 1996, most notably Mike Alexander, Hut Stricklin , Jimmy Spencer, and Derrike Cope.

Allison has actively promoted rail safety for the CSX "Keep on Living" campaign with appearances at Talladega and Daytona.

Bobby Allison Speaker: Bobby Allison is one of the legendary NASCAR drivers who has stories to share from the beginning of this worldwide popular sport. A speaker appearance from Bobby Allison is sure to delight your crowd and guests with memorable behind the scenes NASCAR stories.

Bobby Allison Appearance: Retired now from racing, Bobby has not driven a car competitively for many years but he is still involved in the sport and makes frequent personal appearances. Direct Sportslink secured Bobby Allison's appearance on behalf of Colonial Downs Racetrack.

Bobby Allison Endorsement: Bobby Allison has endorsed many products and companies over the years, including but not limited to Quaker State, Miller Brewing Company and Goodyear Tire Company. Now retired, he has more time available for even more endorsement opportunities for a company looking to reach the NASCAR demographics and audience.

Secure Bobby Allison for Your Event

Based on your interest in Bobby Allison as a speaker or for a personal appearance, Direct Sportslink has provided you additional links below for other sports talent with similar appearance fees, speaker topics, and categories that match Bobby Allison.