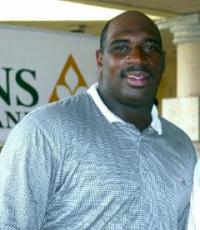 He is a former Ohio State star running back; He played 13 seasons in the NFL and appeared in Super Bowl XXXI
Fee Range: $2,000 - $5,000
Secure Keith Byars
for Your Event

Byars was a tailback at Ohio State University from 1982 to 1985. In 1984, he was runner-up for the Heisman Trophy (to Doug Flutie) after a season where he rushed for a then-school record 1,764 yards and 22 touchdowns, and was selected first team All-America and the Big Ten Conference Most Valuable Player.

A superb rusher, blocker, and pass receiver, Byars was a vital contributor for every team he played on. In 1988 he rushed for 517 yards, recorded 71 receptions (ranking him 9th in the NFL), and scored 10 touchdowns. In 1990, he recorded 81 receptions for 819 yards, the third most receptions in the NFL, rushed for 141 yards, and even completed 4 of 4 passes for 53 yards and 4 touchdowns. In the 1996 season, Byars made his first and only championship appearance, playing with the Patriots in Super Bowl XXXI. His team lost the game 35-21, but the 33-year old Byars had a good performance in it, catching 4 passes for 42 yards and a touchdown.

He has worked as a pre and post-game radio analyst for Ohio State University football games. He has also worked as a television analyst for "New York Football Weekly" and This Week in Football on the YES Network.

Secure Keith Byars for Your Event

Based on your interest in Keith Byars as a speaker or for a personal appearance, Direct Sportslink has provided you additional links below for other sports talent with similar appearance fees, speaker topics, and categories that match Keith Byars.