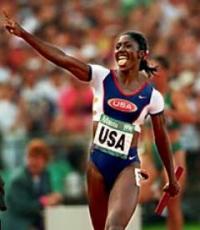 She is widely recognized as one of the greatest female track stars in her era; She has won three gold Olympic medals
Fee Range: $10,000 - $20,000
Secure Gwen Torrence
for Your Event

Gwen Torrence was a sprint athlete and an Olympic gold medalist from the United States.

In her era, Torrence won more Olympic and World Championship medals than any other athlete ever had.

After retiring from athletics, Torrence became a hairdresser and lives with her children, a son named Manley and a daughter named E'mon.

Secure Gwen Torrence for Your Event

Based on your interest in Gwen Torrence as a speaker or for a personal appearance, Direct Sportslink has provided you additional links below for other sports talent with similar appearance fees, speaker topics, and categories that match Gwen Torrence.