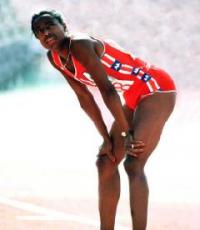 She is arguably the greatest female sprinter ever; She is a member of the National Track and Field Hall of Fame
Fee Range: $10,000 - $20,000
Secure Evelyn Ashford
for Your Event

Evelyn Ashford was was the 1984 Olympic champion in the 100 m. Arguably the greatest female sprinter ever, with a career that spanned an unprecedented five Olympic Games. She has ran under the 11 second barrier over 50 times and was the first to run under 11 seconds in an Olympic Games.

At the 1984 Summer Olympics, Ashford won the 100 m and set a new Olympic Record. At the 1988 Summer Olympics, she was the flag bearer for the United States team in the Opening Ceremony. In the 4 x 100 m, she  ran the final leg, winning her third Olympic gold medal. At her last Olympics, in 1992, Ashford won her third straight Olympic 4x100 m relay. She is one of only four women to have won four gold medals for track and field in Olympic history.

In 1997, Ashford was inducted into the National Track and Field Hall of Fame.

Secure Evelyn Ashford for Your Event

Based on your interest in Evelyn Ashford as a speaker or for a personal appearance, Direct Sportslink has provided you additional links below for other sports talent with similar appearance fees, speaker topics, and categories that match Evelyn Ashford.