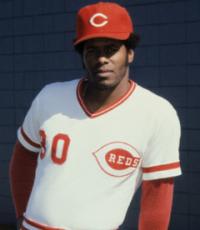 He was the first baseball player to have played on the same team as his son; He was a two-time champion with the Reds; He is a member of the Reds Hall of Fame
Fee Range: $10,000 - $20,000
Secure Ken Griffey Sr.
for Your Event

On August 25, 1973, Griffey was introduced to Major League Baseball with the Cincinnati Reds.

In 1976, Griffey batted a career high .336, finished eighth in the Most Valuable Player voting, and was named to The Sporting News National League All-Star team. That season, the Reds won their second consecutive World Series title.

On August 29, 1990, Griffey, Sr. signed with the Mariners and effectively made history. His son, Ken Jr., also joined the Mariners in 1989 after rising through the minor leagues. The Griffeys made history as the first father-and-son tandem to play on the same Major League Baseball team simultaneously. They played their first game together against the Kansas City Royals on August 31. Griffey, Sr. also hit back-to-back home runs with his son on September 14, 1990, which had also never been done before.

Griffey was inducted into the Cincinnati Reds Hall of Fame in 2004. In 2011, Griffey was named Manager of the Bakersfield Blaze, the Reds Single A affiliate of the California League.

Based on your interest in Ken Griffey Sr. as a speaker or for a personal appearance, Direct Sportslink has provided you additional links below for other sports talent with similar appearance fees, speaker topics, and categories that match Ken Griffey Sr..