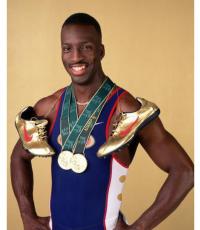 He has won a total of four Olympic Gold Medals for the USA at the 1992, 1996, and 2000 Olympics
Fee Range: Contact Us
Secure Michael Johnson
for Your Event

Johnson won four Olympic gold medals and eight World Championships gold medals.He has held the world and Olympic record in the 200 m, 400 m, and 4 x 400 m relay, and the world record in the indoor 400 m. His 200 m time of 19.32 at the 1996 Summer Olympics stood as the record for over 12 years. Johnson is generally considered one of the greatest long sprinters in the history of track and field.

He is the first male athlete in history to win both the 200 meter dash and 400 meter dash events at the same Olympics, a feat he accomplished at the 1996 Summer Olympics in Atlanta. Johnson is also the only man to successfully defend his Olympic title in the 400 m. Aside from his Olympic success Johnson accumulated eight gold medals at World Championships, and is thus tied with Carl Lewis for the most gold medals won by any runner in history.

Secure Michael Johnson for Your Event

Based on your interest in Michael Johnson as a speaker or for a personal appearance, Direct Sportslink has provided you additional links below for other sports talent with similar appearance fees, speaker topics, and categories that match Michael Johnson.