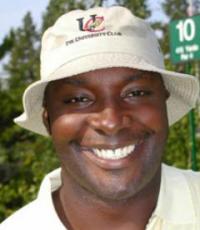 He was a five-time All-Pro wide receiver in the NFL and a five-time Pro Bowl selection
Fee Range: $20,000 - $30,000
Secure Sterling Sharpe
for Your Event

Sharpe was the first round draft pick of the Green Bay Packers in 1988 and had an immediate impact on the team. In his rookie season he started all sixteen games and caught 55 passes. His sophomore season he led the league with 90 receptions and was the first of the Packers to do so since Don Hutson in 1945 and broke Hutson's record of receptions and receiving yards in a season.

A few years later, in 1992, Sharpe and the new quarterback, Brett Favre, teamed up to become one of the top passing tandems in the league. In the final game of that season he and Favre hooked up for a touchdown pass, making it Sharpe's 107th reception of the season, breaking Art Monk's record that had been set in 1984, but in the 1993 season Sharpe broke it again with 112 receptions making him the first player to catch over 100 passes in two straight seasons.

Secure Sterling Sharpe for Your Event

Based on your interest in Sterling Sharpe as a speaker or for a personal appearance, Direct Sportslink has provided you additional links below for other sports talent with similar appearance fees, speaker topics, and categories that match Sterling Sharpe.