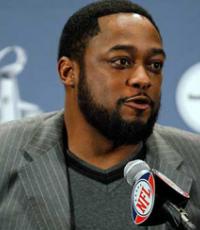 He was the head coach of the Super Bowl XLIII winning Pittsburgh Steelers
Fee Range: $20,000 - $30,000
Secure Mike Tomlin
for Your Event

Tomlin was hired as the defensive backs coach for the Tamp Bay Buccaneers in 2001. In 2002 and 2005, the Buccaneers led the NFL in total defense (fewest yards allowed per game)—during Tomlin's tenure, the defense never ranked worse than sixth overall.

Tomlin was selected by Vikings' head coach Brad Childress to be his defensive coordinator in 2006. The following year, Tomlin became the sixteenth Steelers' head coach on January 22, 2007, when he was hired to replace Bill Cowher, who resigned after spending 15 years with the team. Tomlin is the tenth African-American head coach in NFL history and the first in Steelers franchise history. The Steelers finished Tomlin's first season as head coach with the top-ranked defense in the NFL. Tomlin led the Steelers to the 2007 AFC North Division championship and a 10–6 record in his first year as head coach. In addition he became the first Steelers coach to win division titles in his first two seasons.

When the Steelers defeated the Baltimore Ravens in the 2008 AFC Championship Game, Mike Tomlin became the youngest NFL Head Coach to lead his team to a Super Bowl. On January 29, 2009, Mike Tomlin was named the 2008 Motorola NFL Coach of the Year. In February of the same year, Tomlin became the youngest head coach to win the Super Bowl when his Steelers defeated the Arizona Cardinals in Super Bowl XLIII. He signed an extension with the Steelers in 2012.

Secure Mike Tomlin for Your Event

Based on your interest in Mike Tomlin as a speaker or for a personal appearance, Direct Sportslink has provided you additional links below for other sports talent with similar appearance fees, speaker topics, and categories that match Mike Tomlin.