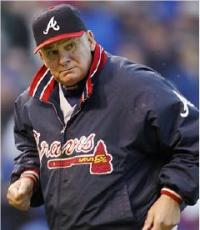 He is one of the winningest managers in the history of MLB; His 1996 Atlanta Braves team won the World Series
Fee Range: Contact Us
Secure Bobby Cox
for Your Event

A Bobby Cox personal appearance, Bobby Cox speaking engagement, or Bobby Cox endorsement will reflect well on your company. To hire Bobby Cox now for any corporate appearance, fundraiser, motivational speaker event, personal appearance, autograph signing, or website endorsement please contact our celebrity agents at 1-877-6-SPORTS. We will contact Bobby Cox or contact Bobby Cox's agent and provide you with the booking fees and availability immediately upon your request. Direct Sportslink is the only sports speakers bureau and talent booking agency based in the United States securing only sports talent for corporations, associations, and organizations for motivational speaking engagements, personal appearances, and endorsements. We are the premier sports celebrity booking agency and a sports celebrity procurement expert. Accordingly, we will provide you with any relevant Bobby Cox website information and booking agent details so that you can hire Bobby Cox for your next event.

Bobby Cox has been a player and coach in Major League baseball. He is best known for his years managing the Atlanta Braves. He first led the Braves from 1978 to 1981, and then managed the Toronto Blue Jays from 1982 to 1985. He later rejoined the Braves in 1985 as a general manager. He moved back to the manager's role during the 1990 season. He led the Atlanta Braves to the World Series Championship in 1995.

On May 12, 2007, Cox passed Sparky Anderson to become the fourth-winningest manager in major league history, with a record of 2,195 wins and 1,698 losses. He led the Braves to a division title every season from 1991 to 2005, excluding the strike-shortened 1994 season; the Braves have competed in the National League East since 1994 and competed in the National League West prior to that.

On August 12, 2011 a luncheon was held by the Braves, and Cox was inducted into the Atlanta braves Hall of Fame and his number six jersey was retired.

At the time of his retirement, he ranked fourth on the baseball all-time managerial wins list.

Secure Bobby Cox for Your Event

Based on your interest in Bobby Cox as a speaker or for a personal appearance, Direct Sportslink has provided you additional links below for other sports talent with similar appearance fees, speaker topics, and categories that match Bobby Cox.