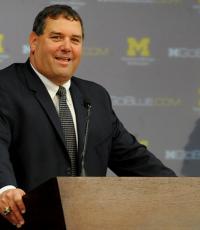 In December 2008, Hoke was hired as the head football coach at San Diego State University. He led the 2010 San Diego State Aztecs football team to the school's first nine-win season since 1971 and a victory over Navy in the 2010 Poinsettia Bowl. Hoke was hired as Michigan's head football coach on January 11, 2011, and after one season went 11-2, taking Michigan to their first BCS Bowl game since the 2006 football season, where Michigan defeated the Virginia Tech Hokies in the 2012 Sugar Bowl. However after a few seasons, in 2014 the Wolverines fired him.

Secure Brady Hoke for Your Event

Based on your interest in Brady Hoke as a speaker or for a personal appearance, Direct Sportslink has provided you additional links below for other sports talent with similar appearance fees, speaker topics, and categories that match Brady Hoke.