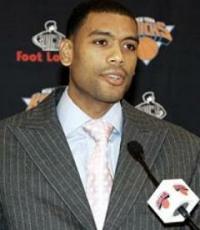 Allan Wade Houston is a former professional basketball player who spent the majority of his career playing shooting guard for the New York Knicks. His nickname is "H2O", derived from the first letter of his name and his regular number "20", and acknowledges his graceful jumpshot, which is "smooth as water".

Houston played at Ballard High School in Louisville, helping them to win the 1988 Kentucky state championship. He went on to play at the University of Tennessee and graduated in 1993 as the school's all-time leading scorer.

Houston was selected 11th overall by the Detroit Pistons in the 1993 NBA Draft. A knee injury would eventually force Houston to announce his retirement, on October 17, 2005.

Houston is remembered as one of the most prolific scorers in Knicks history, and his last-second bank-shot in the deciding game of the 1999 Eastern Conference Quarterfinals against the Miami Heat remains a dramatic moment in Knicks history (especially given that the Knicks went on to make the NBA Finals).

Secure Allan Houston for Your Event

Based on your interest in Allan Houston as a speaker or for a personal appearance, Direct Sportslink has provided you additional links below for other sports talent with similar appearance fees, speaker topics, and categories that match Allan Houston.