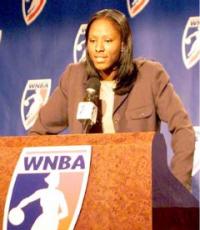 She excelled at the University of Tennessee and was the 1st overall selection in the 1999 WNBA Draft
Fee Range: $10,000 - $20,000
Secure Chamique Holdsclaw
for Your Event

In 1995, Holdsclaw went to the University of Tennessee where she played under coach Pat Summitt and helped to lead the Lady Vols to the women's NCAA's first ever three consecutive Women's Basketball Championships in 1996, 1997 and 1998. The 1998 championship was Tennessee's first ever undefeated season at 39-0 and also set an NCAA record for the most wins ever in a season. She also helped lead Tennessee to 2 SEC regular season titles in 1998 and 1999 and to 3 SEC tournament championships in 1996, 1998 and 1999.

At Tennessee, Holdsclaw was a 4 time Kodak All-America, one of only six women's basketball players to earn the honor. Holdsclaw finished her career with 3,025 points and 1,295 rebounds, making her the all-time leading scoring and rebounder at Tennessee in men's or women's history, the all-time leading scorer and rebounder in SEC women's history, and the all-time leading scorer and rebounder in the NCAA tournament women's history with 470 points and 197 rebounds. She was also only the fifth women's basketball player in NCAA history to have 3,000 points. She is also one of five women's collegiate basketball players to ever accumulate over 2,000 points, 1,000 rebounds, 300 assists and 300 steals.

In 1999, Holdsclaw received the James E. Sullivan Award as the top amateur athlete in the United States. Holdsclaw also won the Naismith trophy for player of the year twice, in 1998 and 1999. In 2000 she was named Naismith's Player of the Century for the 1990s and was also part of an ESPY award given to the Lady Vols as Co-Team of the Decade for the 1990s.

In the 1999 WNBA Draft, Holdsclaw was selected by the Washington Mystics 1st overall. After this selection, Chamique gained the distinction of being the first, and only, female athlete to appear on the cover of SLAM Magazine.

In her first season, she was named the Rookie of the Year and was a starter in the inaugural WNBA All-Star Game. The next year, Holdsclaw was named to the Olympic team, helping to lead them to a gold medal. During her WNBA career, Holdsclaw became a six-time WNBA All-Star selection.

Secure Chamique Holdsclaw for Your Event

Based on your interest in Chamique Holdsclaw as a speaker or for a personal appearance, Direct Sportslink has provided you additional links below for other sports talent with similar appearance fees, speaker topics, and categories that match Chamique Holdsclaw.