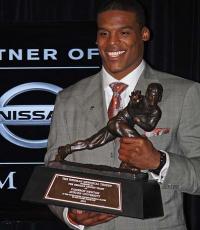 He was the 2010 Heisman Trophy winner; 2011 BCS National Champion; AP NFL's Offensive Rookie of the Year in 2011
Fee Range: Contact Us
Secure Cam Newton
for Your Event

Cam Newton was initially a member of the Florida Gators before transferring to Blinn College and later to Auburn University. He became just the third player in major college history to both rush and pass for 20 or more touchdownds in a single season. In 2011 he won the Heisman Trophy and led Auburn to their second national championship in school history.

Secure Cam Newton for Your Event

Based on your interest in Cam Newton as a speaker or for a personal appearance, Direct Sportslink has provided you additional links below for other sports talent with similar appearance fees, speaker topics, and categories that match Cam Newton.