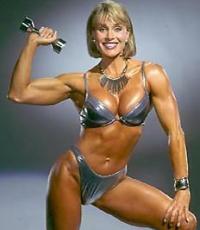 Cory attended Deerfield High School in Deerfield, Illinois, where she was a four sport star (gymnastics, track & field, badminton, and swimming). She majored in interior design at the University of Wisconsin, where she also won four Big Ten pentathlon championships.

Cory has done some acting, and her movie credits include Double Impact (1991), Natural Born Killers (1994), and Ballistic (1995). She has also made a number of TV guest appearances, most notably playing Atalanta on Hercules: The Legendary Journeys. She also hosted an exercise show on ESPN called Gotta Sweat for seven years.

At the 2007 Arnold Classic she became the first woman to be presented with the Lifetime Achievement Award. In 2008, Everson was inducted into the National Fitness Hall of Fame.

Secure Cory Everson for Your Event

Based on your interest in Cory Everson as a speaker or for a personal appearance, Direct Sportslink has provided you additional links below for other sports talent with similar appearance fees, speaker topics, and categories that match Cory Everson.