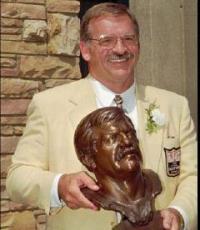 Born in Canton, Ohio, the birthplace of the NFL, Dan Dierdorf played football at Glenwood High School in Canton then the University of Michigan before being drafted by the St. Louis Cardinals in the first round of the 1971 NFL Draft. At Michigan, Dierdorf was consensus All-American in 1970.

Dierdorf began his NFL career as both a guard and a tackle before settling in as a starter at right tackle in 1973. The following season he was named to his first Pro Bowl team. Over the next six years, Dierdorf was a six time Pro Bowler, he was named All-Pro five times, and he was named lineman of the year by his peers three times. In 1996 he received the ultimate honor when he was enshrined into the Pro Football Hall of Fame.

After his retirement, Dierdorf transitioned to the broadcast booth. He called Cardinals games on radio for KMOX in 1984 before moving to CBS television for two seasons.

In 1987, he was added to the Monday Night Football team. Dierdorf stayed at ABC for twelve seasons before a shake up after the 1998 season. He was immediately rehired by CBS to broadcast games for the network.

Dan Dierdorf was the 2008 recipient of the Pro Football Hall of Fame’s Pete Rozelle Radio-Television Award. Dierdorf has his own star on the St. Louis Walk of Fame.

Secure Dan Dierdorf for Your Event

Based on your interest in Dan Dierdorf as a speaker or for a personal appearance, Direct Sportslink has provided you additional links below for other sports talent with similar appearance fees, speaker topics, and categories that match Dan Dierdorf.