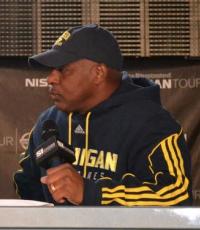 He was one of the most electric college football players ever; He played 11 years in the NFL
Fee Range: $2,000 - $5,000
Secure Anthony Carter
for Your Event

Direct Sportslink secured former University of Michigan great Anthony Carter for his personal appearance on behalf of the Sports Illustrated Nissan Heisman Tour. One of the most popular players in Michigan football history, Anthony signed autographs, talked with guests and did a Q and A session which was a treat for all the Michigan fans. In addition to Anthony Carter, Direct Sportslink secured Charlie Ward and Desmond Howard for the same tour.

Anthony ("A.C.") Carter finished his college career as the University of Michigan's all-time leading receiver, and played professionally for thirteen years in the United States Football League and the National Football League.

A three-time College All-American, he was named Big Ten Conference MVP his senior season, and finished fourth in voting for the Heisman Trophy. He was the third NCAA Division I FBS athlete to total 1000 career yards on both kick returns and punt returns.

In 2001 Carter was elected to the College Football Hall of Fame.

Secure Anthony Carter for Your Event

Based on your interest in Anthony Carter as a speaker or for a personal appearance, Direct Sportslink has provided you additional links below for other sports talent with similar appearance fees, speaker topics, and categories that match Anthony Carter.