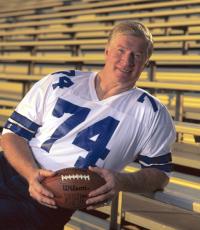 He is an 11 time Pro Bowl selection; He helped lead the Super Bowl VI winning Cowboys; He is inducted in both the College and Pro Football Hall of Fame
Fee Range: $2,000 - $5,000
Secure Bob Lilly
for Your Event

A Bob Lilly personal appearance, Bob Lilly speaking engagement, or Bob Lilly endorsement will reflect well on your company. To hire Bob Lilly now for any corporate appearance, fundraiser, motivational speaker event, personal appearance, autograph signing, or website endorsement please contact our celebrity agents at 1-877-6-SPORTS. We will contact Bob Lilly or contact Bob Lilly's agent and provide you with the booking fees and availability immediately upon your request. Direct Sportslink is the only sports speakers bureau and talent booking agency based in the United States securing only sports talent for corporations, associations, and organizations for motivational speaking engagements, personal appearances, and endorsements. We are the premier sports celebrity booking agency and a sports celebrity procurement expert. Accordingly, we will provide you with any relevant Bob Lilly website information and booking agent details so that you can hire Bob Lilly for your next event.

Lilly played college football at Texas Christian University (TCU), where he was a two-time All-Southwest Conference pick and a consensus All-American. He was a 1961 member of the College Football All-America Team and was a 2006 inductee to the East-West Shrine Game Hall of Fame. Lilly was inducted into the College Football Hall of Fame in 1981. As a first-round draft pick in the 1961 NFL Draft, and the first draft pick in Dallas Cowboys franchise history, Lilly went on to be All-Pro seven times, and was selected to play in 11 Pro Bowl games.

Lilly made the adjustment in the pros becoming the main man in Dallas's vaunted "Doomsday Defense". As a tackle, Lilly was a first-team All-NFL choice every year from 1964 through 1969, then again in 1971. In 1972 he and the rest of the Cowboys won the Super Bowl against the Miami Dolphins, 24-3. His 29-yard sack of Dolphin quarterback Bob Griese is one of the most memorable plays in Super Bowl defensive history. This was the signature play of his 14-year hall-of-fame career.

Affectionately known as "Mr. Cowboy," his name was the first inscribed in the "Dallas Cowboys Ring of Honor", above Texas Stadium and the current Cowboys Stadium. Emmitt Smith, Mel Renfro, Tony Dorsett, Randy White, Roger Staubach, Michael Irvin, Troy Aikman, Drew Pearson and Charles Haley are also members of the Cowboys Ring of Honor. The Cowboys had a Bob Lilly Day on November 23, 1975, to honor him and make Lilly the first inductee into The Ring of Honor.

Secure Bob Lilly for Your Event

Based on your interest in Bob Lilly as a speaker or for a personal appearance, Direct Sportslink has provided you additional links below for other sports talent with similar appearance fees, speaker topics, and categories that match Bob Lilly.