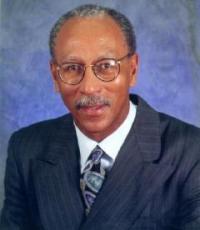 Direct Sportslink secured former Detroit Mayor and NBA legend Dave Bing for his appearance on behalf of Ownes Cornings' Black History Month celebration. Dave participated in a Q and A panel, posed for pictures and gave a speech to the round out the day. To secure Dave Bing for any personal appearance or speaking engagement please contact a Direct Sportslink booking agent for his immediate fee quote and availability.

A Dave Bing personal appearance, Dave Bing speaking engagement, or Dave Bing endorsement will reflect well on your company. To hire Dave Bing now for any corporate appearance, fundraiser, motivational speaker event, personal appearance, autograph signing, or website endorsement please contact our celebrity agents at 1-877-6-SPORTS. We will contact Dave Bing or contact Dave Bing's agent and provide you with the booking fees and availability immediately upon your request. Direct Sportslink is the only sports speakers bureau and talent booking agency based in the United States securing only sports talent for corporations, associations, and organizations for motivational speaking engagements, personal appearances, and endorsements. We are the premier sports celebrity booking agency and a sports celebrity procurement expert. Accordingly, we will provide you with any relevant Dave Bing website information and booking agent details so that you can hire Dave Bing for your next event.

Bing went on to become a successful businessman, founding The Bing Group in the Detroit area after his retirement. The company, among other things, supplies metal stampings to the auto industry. At the 1990 NBA All-Star Game, he received the Schick Achievement Award for his work after his NBA career. His number 21 was retired by the Detroit Pistons, and in 1996, he was named as one of the NBA's 50 Greatest Players of all time.

Secure Dave Bing for Your Event

Based on your interest in Dave Bing as a speaker or for a personal appearance, Direct Sportslink has provided you additional links below for other sports talent with similar appearance fees, speaker topics, and categories that match Dave Bing.