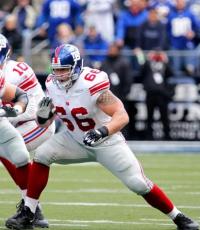 David Diehl played his entire career with the New York Giants of the National Football League. He played college football for the University of Illinois. The Giants selected him in the fifth round of the 2003 NFL Draft.

In his rookie season, Diehl started all 16 games, becoming the first Giants rookie to do so since Mark Bavaro in 1985. He was one of 14 NFL rookies to start all 16 games in 2003 and was the only rookie to start at the same position each game during the 2003 season. In 2005, Diehl played yet another position, starting 15 regular season games at left guard and 1 game at right tackle. That season, Tiki Barber rushed for a franchise-record 1,860 yards, and Eli Manning passed for 3,762 yards, the 5th-highest total in franchise history. The Giants signed Diehl to a six-year, $31 million contract in May 2008. At the end of the 2009 season, Diehl was elected to the 2010 Pro Bowl as a Super Bowl Participant replacement. Diehl was moved from left tackle to right tackle following the release of Rich Seubert and Shaun O'Hara and the signing of David Baas. He had started every game of his NFL career until 2010, when he tore his hamstring and suffered a partially dislocated hip.

On August 21, 2013, the New York Giants announced that Diehl will undergo surgery to repair his injured right thumb. The recovery time was expected to be approximately six weeks. On January 24, 2014, Diehl announced his retirement after 11 seasons. In 2014 he joined the Fox NFL team of analysts covering NFL games.

Diehl received the Wellington Mara NFL Man of the Year Award May 22, 2012 at the annual Boys Hope Girls Hope Dinner.

Secure David Diehl for Your Event

Based on your interest in David Diehl as a speaker or for a personal appearance, Direct Sportslink has provided you additional links below for other sports talent with similar appearance fees, speaker topics, and categories that match David Diehl.