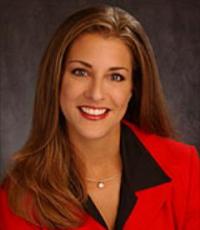 She is best known for her years as a CBS Sports broadcast analyst covering the NFL and NCAA basketball
Fee Range: $10,000 - $20,000
Secure Bonnie Bernstein
for Your Event

Bonnie Bernstein was the lead sideline reporter for the NFL on CBS and the NCAA Men's Basketball Championships. She covered Super Bowls XXXV and XXXVIII for the Network and during Super Bowl XXXVIII, became the first reporter to serve as both a network TV and network radio correspondent, filing reports for CBS/Westwood One Radio. Bernstein also hosted the NCAA Women's Gymnastics Championships and CBS' Emmy-nominated anthology series, "Championships of the NCAA" and served as a studio host for the Fidelity CBS SportsDesk and  AT THE HALF - CBS Sports' college basketball halftime studio show. Additionally, Bernstein contributed features for THE NFL TODAY.

Bernstein joined CBS Sports in 1998. After one season as a correspondent for THE NFL TODAY, she moved out to the NFL sidelines and in 2004, joined the lead announce crew with Jim Nantz and Phil Simms. In addition to her primary roles with the NFL and college basketball, Bernstein has also covered track and field and figure skating for the Network and has hosted the U.S. Open Tennis Championships (2000) and the Hambletonian (2000).

Bernstein joined CBS Sports from ESPN, where she was a correspondent for "SportsCenter" (1995-98). At ESPN, she covered a variety of major events, including the NBA Finals (1996-98), the Major League Baseball Playoffs (1995-97) and the NCAA Women's Basketball Championships (1997-98). She also served as a reporter for "NFL Countdown" and "College GameDay."

Secure Bonnie Bernstein for Your Event

Based on your interest in Bonnie Bernstein as a speaker or for a personal appearance, Direct Sportslink has provided you additional links below for other sports talent with similar appearance fees, speaker topics, and categories that match Bonnie Bernstein.