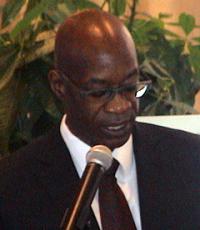 Moses was track and field star who won gold medals in the 400-meter hurdles at the 1976 and 1984 Summer Olympics. Between 1977 and 1987, Moses won 107 consecutive finals (122 consecutive races). He set the world record in his event four times. In addition to his running, Moses was also an innovative reformer in the areas of Olympic eligibility and drug testing.

Moses was the only American male to win an individual track and field gold medalat the 1976 Summer Olympics in Montreal. Though it was his first international meet, Moses set a world record of 47.64 seconds.

By the time American Danny Harris beat Moses in Madrid on June 4, 1987, Moses had won 122 consecutive races, set the world record two more times, won three World Cup titles, won two World Championships, and earned his second Olympic gold medal in Los Angeles, where he was selected to take the Olympic Oath. After losing to Harris, he won 10 more races in a row, then finished third in the final 400-meter race of his career at the 1988 Summer Olympics in Seoul.

Moses was the first recipient of USA Track & Field's "Jesse Owens Award" as outstanding U.S. male track and field performer in 1981, and received the AAU's James E. Sullivan Award as outstanding amateur athlete in the United States in 1983.

After his retirement from track, Moses competed in a 1990 World Cup bobsled race at Winterburg, Germany. He and long-time US Olympian Brian Shimer won the two-man bronze medal.

In 1994, Moses received an MBA from Pepperdine University and was inducted into the National Track and Field Hall of Fame.

Since election in 2000, Moses has been a chairman of the Laureus World Sports Academy, which seeks "to promote and increase participation in sport at every level, and also to promote the use of sport as a tool for social change around the world." Several dozen Olympic and world champion athletes, through the Laureus Sports for Good Foundation, work to assist disadvantaged youths around the world.

In May 2009, the University of Massachusetts Boston awarded Moses an honorary doctorate for his efforts to maintain the integrity of Olympic sports and for his use of sports as a tool for positive social change.

Secure Edwin Moses for Your Event

Based on your interest in Edwin Moses as a speaker or for a personal appearance, Direct Sportslink has provided you additional links below for other sports talent with similar appearance fees, speaker topics, and categories that match Edwin Moses.