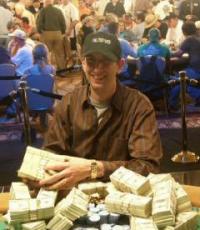 Originally a tournament backgammon player for eight years, Seidel eventually started playing the stock market, and then moved on to poker. He was one of the group of now famous players from the legendary Mayfair Club. After a trip to Las Vegas for a backgammon tournament, where he played some low-limit poker, Erik returned to the Mayfair eager for a local game. Before long, the Mayfair was spreading a poker game most every night.

In 1987, Erik made his first trip to the World Series of Poker. The trip started poorly. He played nine, one-table satellites for the Main Event and lost all of them. Undeterred, he bought into the Main Event, which would be his first major poker tournament. He finished second, outlasting everyone but Johnny Chan. The final hand of the tournament was made famous by the movie Rounders.

Despite this early success, Erik didn't immediately turn pro. He returned to New York to trade options. Later, he became an independent options market maker on the AMEX. He made frequent trips to Vegas and spent a good portion of his time playing tournaments and high-stakes cash games.

Erik didn't take on poker as a full-time profession until 1995, when he and his wife moved to Las Vegas. Since then, he has become regarded as one of the best and most consistent players in the world and has won numerous World Series of Poker titles. Seidel is also part of the design team for Full Tilt Poker.

Secure Erik Seidel for Your Event

Based on your interest in Erik Seidel as a speaker or for a personal appearance, Direct Sportslink has provided you additional links below for other sports talent with similar appearance fees, speaker topics, and categories that match Erik Seidel.