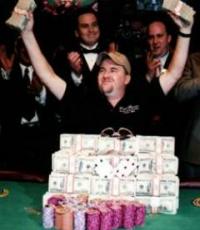 Chris Moneymaker is the real name of the twenty-seven year old who won the 2003 World Series of Poker No Limit Hold'em Championship. His story is fit for a Hollywood movie, beginning with winning his entry into the Series via the PokerStars online card room. His total investment was forty dollars, and he won $2,500,000. After winning his way into the event, he realized it would be difficult to scrape together airfare and hotel costs. His father, Mike and a friend, David Gamble put up some money to cover the cost for the trip in exchange for a portion of his winnings. He also donated $25,000 of his prize to cancer research.

Christopher Brian Moneymaker took the World Series of Poker 2003 by storm. There are many people who insist that it was the luck of the cards that earned Chris his victory. Although, luck played a part in his victory, he showed that he has the skill to play with the big boys. He had been playing three years before he won the Series, but had never played a live tournament. The first day he had Johnny Chan sitting on his right and Phil Ivey on his left. He said that he got outplayed and that night decided to not be afraid anymore. If he got beat, he got beat, but he was going to play his game. Indeed he did. He mixed it up beautifully and made some great plays along the way. The one hand that sticks in a lot of people's minds is when he went all in with his pocket 8s against Humberto Brenes's pocket A's. He caught the 8 giving him a set and sent Humberto to the rail.

He now travels the world as a spokesperson for various related poker products and plays tournaments when he can.

Secure Chris Moneymaker for Your Event

Based on your interest in Chris Moneymaker as a speaker or for a personal appearance, Direct Sportslink has provided you additional links below for other sports talent with similar appearance fees, speaker topics, and categories that match Chris Moneymaker.