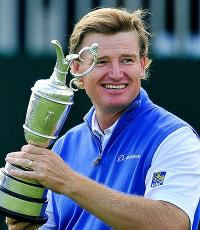 He was inducted into the World Golf Hall of Fame in 2011; He was named the PGA Tour Rookie of the Year in 1994
Fee Range: Contact Us
Secure Ernie Els
for Your Event

An Ernie Els personal appearance, Ernie Els speaking engagement, or Ernie Els endorsement will reflect well on your company. To hire Ernie Els now for any corporate appearance, fundraiser, motivational speaker event, personal appearance, autograph signing, or website endorsement please contact our celebrity agents at 1-877-6-SPORTS. We will contact Ernie Els or contact Ernie Els' agent and provide you with the booking fees and availability immediately upon your request. Direct Sportslink is the only sports speakers bureau and talent booking agency based in the United States securing only sports talent for corporations, associations, and organizations for motivational speaking engagements, personal appearances, and endorsements. We are the premier sports celebrity booking agency and a sports celebrity procurement expert. Accordingly, we will provide you with any relevant Ernie Els website information and booking agent details so that you can hire Ernie Els for your next event.

A former World No. 1, Els is known as "The Big Easy" due to his imposing physical stature along with his fluid golf swing. Among his numerous career victories are several major championships: the U.S. Open in 1994 at Oakmont and in 1997 at Congressional, and The Open Championship in 2002 at Muirfield and in 2012 at Royal Lytham & St Annes. He is one of a few players to twice win both the U.S. Open and The Open Championship.

Other highlights in Els' career include topping the 2003 and 2004 European Tour Order of Merit (money list), and winning the World Match Play Championship a record seven times. He was the first member of the European Tour to earn over 25 million Euros from European Tour events. He was elected to the World Golf Hall of Fame in 2010, on his first time on the ballot, and was inducted in May 2011.

When not playing, Els has had a golf course design business, a charitable foundation which supports golf among underprivileged youngsters in South Africa, and a highly-regarded wine-making business. He has also written a popular golf instructional column in Golf Digest magazine for several years.

Secure Ernie Els for Your Event

Based on your interest in Ernie Els as a speaker or for a personal appearance, Direct Sportslink has provided you additional links below for other sports talent with similar appearance fees, speaker topics, and categories that match Ernie Els.