Merril Hoge for City of Hope 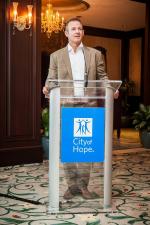 Merril Hoge Speaking for The City of Hope

Direct Sportslink has worked with The City of Hope for many years securing after dinner keynote speakers. Merril Hoge was diagnosed with non-Hodgkin's lymphoma in 2003 and is now cancer free. His passionate "Find A Way" speech is moving and inspirational. To secure Merril hoge for your next speaking engagement, fundraiser, or personal appearance please contact a Direct Sportslink booking agent for an immediate fee quote and availability.

The Pittsburgh Steelers selected Hoge in the tenth round of 1987 NFL Draft with the 261st pick overall. After seven seasons with the Steelers, Hoge signed with the Chicago Bears as a free agent in 1994.

In his career, Hoge gained 3139 rushing yards and 2133 receiving yards, along with 34 touchdowns. While playing fullback in the Steeler's I-form offense, he scored 10 touchdowns in 1990.

In 1997, Hoge was hired as an on-air football analyst for ESPN.

Hoge injured his shoulder in an automobile accident in June 2002 and had an operation to repair a torn ligament. During an examination six months after surgery, Hoge told his doctor about a recurring back pain. His doctor began ordering tests to determine the cause. On February 14, 2003, Hoge was diagnosed with stage II Non-Hodgkin lymphoma. He had the first of six chemotherapy treatments on February 28.

On July 2, 2003, after completing the chemotherapy, Hoge was declared cancer free. Hoge has served on the board of directors of the Highmark Caring Foundation.

Secure Merril Hoge for Your Event

Based on your interest in Merril Hoge as a speaker or for a personal appearance, Direct Sportslink has provided you additional links below for other sports talent with similar appearance fees, speaker topics, and categories that match Merril Hoge.