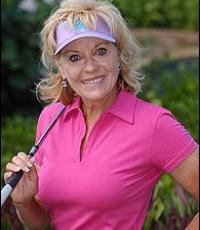 She was the 1974 LPGA Rookie of the Year; She won three Major Championships and Sixteen LPGA victories
Fee Range: Contact Us
Secure Jan Stephenson
for Your Event

More than any other female golfer, Jan Stephenson helped grow the audience for the LPGA in the late 70s and 80s with her glamorous style and appearance. Stephenson was a founder of the Women's Senior Golf Tour.

In her early year, Jan won five consecutive New South Wales Schoolgirl Championships, beginning in 1964, and followed that up with three straight wins in the New South Wales Junior Championship. She turned pro in 1973 and won the Australian Open that year. Stephenson joined the LPGA Tour in 1974 and was named Rookie of the Year.

Jan Stephenson earned her first LPGA Tour victory in 1976 and her most recent in 1987. She has 16 LPGA victories, including three majors: 1981 Peter Jackson Classic; 1982 LPGA Championship; 1983 U.S. Women's Open. In 1985, she became only the ninth player in LPGA history to surpass $1 million in career earnings.

In 2003, at age 52, Jan Stephenson became the first woman to play in a Champions PGA Tour event when she teed off at the Turtle Bay Championship.

Stephenson volunteers her time with many charities, and has produced an exercise video for people with arthritis. She is one of the few women in the golf course design business.

Secure Jan Stephenson for Your Event

Based on your interest in Jan Stephenson as a speaker or for a personal appearance, Direct Sportslink has provided you additional links below for other sports talent with similar appearance fees, speaker topics, and categories that match Jan Stephenson.