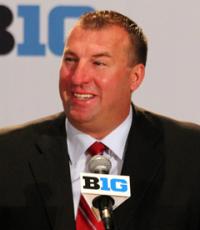 He was the Head Coach for the back to back 2010/2011 Big Ten Champion Wisconsin Badgers before accepting the Head Coach position at the University of Arkansas
Fee Range: $10,000 - $20,000
Secure Bret Bielema
for Your Event

Bielema played college football at the University of Iowa from 1989 to 1992. He went on to play for the Milwaukee Mustangs, a team in the Arena Football League.

In his first season as head coach of the Wisconsin Badgers in 2006, Bielema's team ended the regular season 11–1 (7–1 in Big Ten Conference play). With the 35–3 defeat of the University at Buffalo on November 18, 2006, Bielema became the first coach in UW history to win 11 games in the regular season. After a 17–14 victory over the Arkansas Razorbacks in the Capital One Bowl on January 1, 2007, he became the third coach in NCAA history to win 12 games in his rookie season, finishing 12–1. Bielema coached Wisconsin to victories in 17 of his first 18 games. He went on to win back to back Big Ten titles in 2010 and 2011.

On December 4, 2012, it was announced that Bielema was leaving Wisconsin to become the head coach of the Arkansas Razorbacks.

Secure Bret Bielema for Your Event

Based on your interest in Bret Bielema as a speaker or for a personal appearance, Direct Sportslink has provided you additional links below for other sports talent with similar appearance fees, speaker topics, and categories that match Bret Bielema.