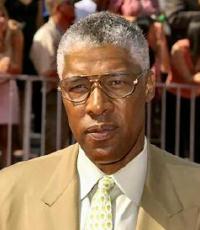 He is a member of both The Naismith Basketball Hall of Fame; He is considered one of the greatest basketball players of all-time
Fee Range: $40,000 - $50,000
Secure Julius Erving
for Your Event

Julius "Dr.J" Erving, was the dominant player of his era, an innovator who changed the way the game was played. He was a wizard with the ball, performing feats never before seen: midair spins and whirls punctuated by powerful slam dunks.

Erving was an ideal ambassador for the game. He was the epitome of class, and no player was more respected. "As a basketball player, Julius was the first to truly take the torch and become the spokesman for the NBA," said friend and former coach Billy Cunningham. "He understood what his role was and how important it was for him to conduct himself as a representative of the league. Julius was the first player I ever remember who transcended sports and was known by one name -- Doctor."

Erving began his professional career in the American Basketball Association with the Virginia Squires and the New York Nets. Widely regarded as the greatest player of his time, he is often considered to have been the main catalyst for the ABA-NBA merger in 1976. A 6-7, 210-pound small forward, he also played for 11 years with the Philadelphia 76ers, leading them to the NBA crown in 1983.

In his five ABA seasons, Erving won three scoring titles, three Most Valuable Player Awards and two league championships. During his 11-year NBA career Erving was an All-Star each season, the league's Most Valuable Player in 1981 and a five-time member of the All-NBA First Team. He scored 30,026 points in his combined ABA and NBA career, only four people have scored more points in the history of professional basketball.

Secure Julius Erving for Your Event

Based on your interest in Julius Erving as a speaker or for a personal appearance, Direct Sportslink has provided you additional links below for other sports talent with similar appearance fees, speaker topics, and categories that match Julius Erving.