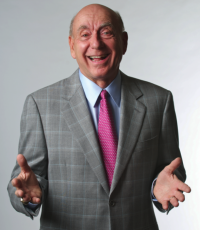 Also known as "Dickie V", he is well known as a college basketball broadcaster. He is known for catchphrases such as "baby" and "diaper dandy" (outstanding freshman player), as well as enthusiastic and colorful remarks he makes during games, and has authored numerous books and appeared in several movies.

In 2011 the University of Detroit named their basketball court in his honor. He was close friends with Jim Valvano, also known as "Jimmy V", and has continued to spearhead fundraising activities for the V Foundation for Cancer Research in his honor.

Secure Dick Vitale for Your Event

Based on your interest in Dick Vitale as a speaker or for a personal appearance, Direct Sportslink has provided you additional links below for other sports talent with similar appearance fees, speaker topics, and categories that match Dick Vitale.