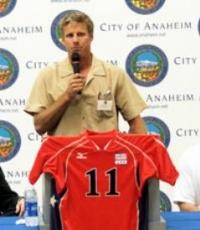 He is the only person to have won Olympic gold medals in both indoor and beach volleyball
Fee Range: Contact Us
Secure Karch Kiraly
for Your Event

Kiraly went on to attend UCLA, earning a B.S. in biochemistry in 1983 while leading the Bruins to three national titles (1979, 1981, 1982). He also made his first appearances for the senior national team while at UCLA. At UCLA, he was a member of the Lambda Chi Alpha fraternity.

Kiraly went on to become a fixture on the national team through much of the 1980s as a combination setter/hitter. Team USA would win Olympic gold medals in 1984 and 1988 with Kiraly. He was also named by FIVB (International Volleyball Federation) as the top player in the world in 1986 and 1988.

After the 1988 Olympics, he retired from the national team. After a stint of club volleyball in Italy, he returned to the U.S. to play beach volleyball full-time. Kiraly would win a record 146 professional beach volleyball titles, and partnered with Kent Steffes to win the first men's Olympic beach volleyball tournament in 1996. Even in his mid-forties, he continues to compete effectively against far younger players; his early-2000s partnership with Mike Lambert revitalized his career.

He was teh first person to win over $3 million in prize money in beach volleyball.

Secure Karch Kiraly for Your Event

Based on your interest in Karch Kiraly as a speaker or for a personal appearance, Direct Sportslink has provided you additional links below for other sports talent with similar appearance fees, speaker topics, and categories that match Karch Kiraly.