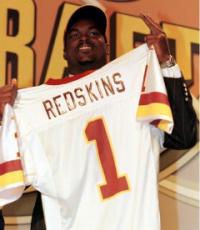 He is widely consdiered one of the greatest Pennsylvania high school football players; After a standout career at Penn State University, he was selected as the #2 overall pick in the 2000 NFL Draft
Fee Range: Contact Us
Secure LaVar Arrington
for Your Event

As a senior linebacker and running back at North Hills Senior High School in Pittsburgh, Arrington was named the 1996 Parade National Player of the Year. He was only the second player in Pennsylvania Class 4-A history to rush for more than 4,000 career yards. Arrington is widely considered one of the greatest high school football players ever to emerge from western Pennsylvania.

Arrington's career at Penn State earned him numerous awards. He was an All Big-Ten selection, twice a first team All-American, and he won the 1999 Chuck Bednarik and Dick Butkus awards for his defensive prowess. Among his many outstanding plays, he is most famous for a spectacular play that has come to be known as "The LaVar Leap."

Arrington was drafted as the second pick overall in the 2000 NFL Draft by the Washington Redskins. As a Redskin, Arrington became a three-time All-Pro selection and a three-time Pro Bowl selection.

Arrington's 7,500-square-foot restaurant, The Sideline, in Landover, Maryland opened on January 30, 2008. On December 22, 2007, Arrington previewed the restaurant for 1,000 underprivileged children, who were treated to a holiday meal and donated toys. The event was the inaugural event of the Grand Destiny Foundation, a charity founded by Arrington with fellow NFL linebacker Ray Lewis.

Secure LaVar Arrington for Your Event

Based on your interest in LaVar Arrington as a speaker or for a personal appearance, Direct Sportslink has provided you additional links below for other sports talent with similar appearance fees, speaker topics, and categories that match LaVar Arrington.