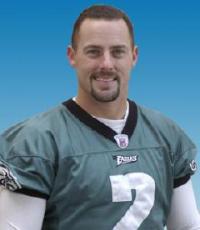 He is one of the best NFL kickers of all-time having set numerous NFL kicking records
Fee Range: $5,000 - $10,000
Secure David Akers
for Your Event

Between 1997 and 1998, as an undrafted free agent, he spent time trying to make the team with the Atlanta Falcons, Carolina Panthers and the Washington Redskins. He was signed by the Redskins in 1998 and played in one game for them, making two extra points but missing two field goal attempts.

He was later released by Washington, and was claimed from waivers by the Philadelphia Eagles in 1999. He was then allocated to NFL Europe, where he played one season for the Berlin Thunder. He impressed scouts with his power and accuracy, and earned the permanent kicker spot for the Eagles in 2000.

Akers proved to be one of the biggest special teams surprises in all of the NFL that season. He made 29 out of 33 field goals (an 87.9% success rate), and had a team-record 121 points. Akers also gained a reputation as a clutch kicker, which helped earn him NFC Special Teams Player of the Month for November 2000. He made the Pro Bowl for the first time in 2001 as he went 26 for 31, making a team-record 17 consecutive field goals during the season.

One of Akers' best statistical seasons was 2002 when he connected on 30 of 34 field goals (88.2%), scored a whopping team-record 133 points, and made another Pro Bowl. In 2004, Akers connected on 84.4% of his field goals and continued his to build his reputation as one the most consistent kickers in the league's history.

Secure David Akers for Your Event

Based on your interest in David Akers as a speaker or for a personal appearance, Direct Sportslink has provided you additional links below for other sports talent with similar appearance fees, speaker topics, and categories that match David Akers.