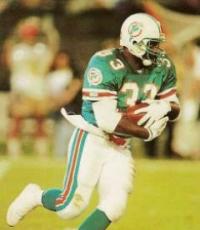 He is a former first round draft pick by the Miami Dolphins; His book, Unconquered, is the extraordinary story of the highs in sports combined with personal hardships
Fee Range: $2,000 - $5,000
Secure Sammie Smith
for Your Event

Smith has played for some of the most winningest coaches of all time in both college (Bobby Bowden) and the NFL (Don Shula). At Florida State, he had excelled not only in football, but as a track star with his relay partner, Deion Sanders. With the Miami Dolphins he shared a backfield with Hall of Famer Dan Marino. At Miami, he was the leading rusher during the 1989 and the 1990 seasons. After playing just four seasons in the NFL, Sammie retired from football in 1992 due to injuries.

In Sammie's book, unconquered and forthcoming about his life, he relates his ascent from humble beginnings in Zellwood, Florida, to the acme of professional athletic success. The story also recounts the much less well known personal hardships of this remarkable young man, including at 22, the heartbreaking death of his infant son.

Remarried with a baby daughter, he has now owned a successful Orlando area real estate company and he speaks frequently to athletes and young people counseling them on the wages of the wrong path. For anyone who has ever felt overwhelmed or that the world is a hopeless place, Sammie Smith's moving personal story proves there is a light at the end of the tunnel.

Secure Sammie Smith for Your Event

Based on your interest in Sammie Smith as a speaker or for a personal appearance, Direct Sportslink has provided you additional links below for other sports talent with similar appearance fees, speaker topics, and categories that match Sammie Smith.