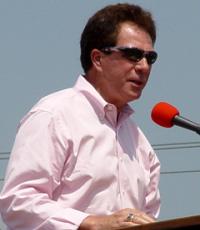 As he moved into the Cup level in the 1970's, his aggressive driving and outspoken style earned him the nickname "Jaws", a reference to the 1975 film about a killer shark.

His final career win came in 1992, ironically in NASCAR's Florentine classic at Darlington, SC in the Mountain Dew Southern 500, his only win in NASCAR's fourth major, and making him the fourth (of six) drivers to clinch a Career Grand Slam by winning each of the four majors. Overall, he had nine wins in majors.

After his retirement in 2000, Waltrip signed with Fox to be their lead NASCAR analyst and race commentator. Waltrip has also been an analyst for Speed TV. On June 14, 2011, Waltrip was selected to the NASCAR Hall of Fame.

Secure Darrell Waltrip for Your Event

Based on your interest in Darrell Waltrip as a speaker or for a personal appearance, Direct Sportslink has provided you additional links below for other sports talent with similar appearance fees, speaker topics, and categories that match Darrell Waltrip.