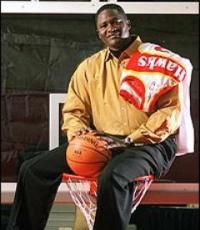 He is a nine-time NBA All-Star; He won two NBA Slam Dunk contests; He is one of the greatest players in NBA history
Fee Range: $10,000 - $20,000
Secure Dominique Wilkins
for Your Event

Wilkins is a former NBA superstar, "'Nique" (a.k.a. The Human Highlight Film) is regarded as one of the greatest forwards to ever play in the NBA. Wilkins left the University of Georgia after his junior year, where he was drafted by the Utah Jazz in the 1982 NBA Draft but he was traded to the Atlanta Hawks several months after the draft. From 1983-84 to 1993-94, Wilkins never averaged fewer than 20 points per game and captured a scoring title in 1985-86 with an average of 30.3 points per game.

Wilkins, in addition to his eleven seasons with the Hawks, had short stints with the Los Angeles Clippers, the Boston Celtics, the San Antonio Spurs and the Orlando Magic before he retired in 1999.

Wilkins was instrumental to the Hawk's prominence in the 1980s, the club recorded 50-win seasons four times during the decade. As Wilkins entered his thirties, and the Hawks started to require an all-around contribution from their star, Wilkins evolved into an all-around player, averaging 9.0 rebounds and 3.0 assists in the 1990 season. Wilkins, a nine-time NBA All-Star and the winner of two Slam Dunk contests, registered 26,668 points (one of only a couple players) and 7,169 rebounds in his NBA career.

His #21 jersey was retired by the Hawks on January 13, 2001. In 2004, Wilkins joined the Hawks as the Vice President of Basketball, overlooking the senior management team on basketball related issues. He has also served as the color commentator for Hawks' games.

In 2010, Wilkins signed an agreement with 24 Hour Fitness to develop the Dominque Wilkins Basketball Academy.

Secure Dominique Wilkins for Your Event

Based on your interest in Dominique Wilkins as a speaker or for a personal appearance, Direct Sportslink has provided you additional links below for other sports talent with similar appearance fees, speaker topics, and categories that match Dominique Wilkins.