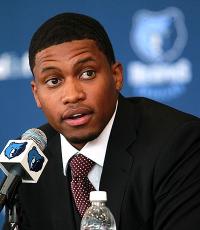 A Rudy Gay personal appearance, Rudy Gay speaking engagement, or Rudy Gay endorsement will reflect well on your company. To hire Rudy Gay now for any corporate appearance, fundraiser, motivational speaker event, personal appearance, autograph signing, or website endorsement please contact our celebrity agents at 1-877-6-SPORTS. We will contact Rudy Gay or contact Rudy Gay's agent and provide you with the booking fees and availability immediately upon your request. Direct Sportslink is the only sports speakers bureau and talent booking agency based in the United States securing only sports talent for corporations, associations, and organizations for motivational speaking engagements, personal appearances, and endorsements. We are the premier sports celebrity booking agency and a sports celebrity procurement expert. Accordingly, we will provide you with any relevant Rudy Gay website information and booking agent details so that you can hire Rudy Gay for your next event.

During his first season at Connecticut, Gay was also named the National Freshman of the Year by The Sporting News. Gay, widely regarded as one of the top future NBA prospects, announced on April 17 that he would enter the 2006 NBA Draft. He was selected with the 8th overall pick in the draft by the Houston Rockets, who then traded him to the Memphis Grizzlies.

Gay averaged 10.8 points per game to help the Grizzlies win 22 games in 2007. After earning Rookie of the Month honors in November of 2006, he was named to the NBA’s All-Rookie First Team for the 2006-07 season and finished third in NBA Rookie of the Year voting. On July 1, 2010, Gay re-signed with the Memphis Grizzlies for a five year contract. Gay helped USA win its first gold medal at the 2010 FIBA World Championship since 1994, averaging 7.0 points, 2.9 rebounds and 1.00 steals in 13.4 minutes in nine games for the undefeated Americans.

In 2010, Gay was named an ambassador for the Hoops for St. Jude fundraising program for St. Jude Children's Research Hospital in Memphis and donated $20,000 to the program, which allows donors to pledge a set amount of dollars for each point scored by Gay and other participating NBA players.

In 2012, Gay was awarded the KIA Community Assist Award for April in recognition of his outstanding efforts in the Memphis community and his ongoing philanthropic and charitable work, particularly his ongoing support of St. Jude Children’s Research Hospital in Memphis. As a result, KIA and the NBA have committed to donate $10,000 on Gay’s behalf to the charity of his choice. Gay, who wears number 22, made a personal donation of $22,222.22 to the hospital.

Gay has served as a keynote speaker at the Boys & Girls Clubs of Greater Memphis’ annual Steak N’ Burger Dinner, which helped the organization raise more than $300,000. Gay also is a supporter of the Stax Music Academy in Memphis, where he has spent time with students and helped them raise money for Staxtacular, the school’s annual fundraiser, by collecting autographed memorabilia for the silent auction and hosting meet and greets with the event sponsors. With Gay’s help, the 2012 Staxtacular raised more than $100,000.

Secure Rudy Gay for Your Event

Based on your interest in Rudy Gay as a speaker or for a personal appearance, Direct Sportslink has provided you additional links below for other sports talent with similar appearance fees, speaker topics, and categories that match Rudy Gay.