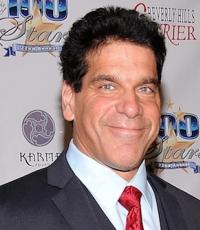 Lou Ferrigno was the keynote guest speaker for the Athens Chamber of Commerce. He was the perfect motivational speaker for the audience with many of the attendees being hearing impaired children. An internationally known name, Lou was a big bit! After speaking, he signed autographs and took pictures with the guests. To hire Lou Ferrigno for a motivational speaking engagement or personal appearance please contact a Direct Sportslink celebrity booking agent.

Thank you Direct Sportslink for helping us secure Lou Ferrigno as speaker for our annual fundraising dinner. Throughout the entire process you made sure the details were covered, and provided us with the assistance we needed to make sure that our event was successful. I highly recommend Direct Sportslink as you plan your upcoming fundraisers.

After graduating from high school in 1969, Ferrigno won his first major titles, IFBB Mr. America and IFBB Mr. Universe, four years later. Early in his career he lived in Columbus and trained with Arnold Schwarzenegger. In 1974, he came in second on his first attempt at the Mr. Olympia competition. He then came third the following year.

Ferrigno competed in the first World's Strongest Man competition in 1977, where he finished fourth in a field of eight competitors.

In the early 1990s, Ferrigno returned to bodybuilding, competing for the 1992 and 1993 Mr. Olympia titles. Finishing 12th and 10th, respectively, he then turned to the 1994 Masters Olympia, where after this, he retired from competition.

In November 1978 and again in May 1979 Ferrigno appeared in Battle of the Network Stars. In 1983, Ferrigno appeared as John Six on the short lived medical drama Trauma Center. Ferrigno played himself during intermittent guest appearances on the CBS sitcom, The King of Queens, beginning in 2000 and continuing until the program's conclusion in 2007. He also made cameo appearances as a security guard in both the 2003 film Hulk and the 2008 film The Incredible Hulk, in which he also voiced the Hulk.

Ferrigno later appeared as himself in the 2009 feature film comedy I Love You, Man. In February 2006, Ferrigno was sworn in as a Los Angeles County, California reserve sheriff's deputy.

Ferrigno has sold his own line of fitness equipment through his company, Ferrigno Fitness. In November 2010, Ferrigno was sworn in as a member of a Maricopa County, Arizona volunteer sheriff.

Ferrigno was a contestant on season five of the NBC reality television series The Celebrity Apprentice, which premiered in February 2012. His voice was once again utilized for the Hulk in the 2012 film The Avengers. Lou travels from California for motivational speaking engagements and personal appearances.

Secure Lou Ferrigno for Your Event

Based on your interest in Lou Ferrigno as a speaker or for a personal appearance, Direct Sportslink has provided you additional links below for other sports talent with similar appearance fees, speaker topics, and categories that match Lou Ferrigno.