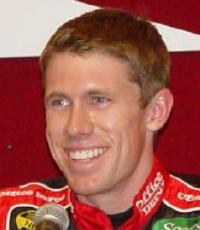 As with so many race car drivers, the sports of racing has been a part of Carl Edwards' life for as long as he can remember.

His father, Carl "Mike" Edwards, has been racing modified stock cars and USAC midgets for four decades, accumulating over 200 feature wins at several Midwestern tracks. The younger Edwards fired up his racing career at the age of 13 in 1993 by driving four-cylinder mini-sprints.

He got his first taste of NASCAR in the Weekly Racing Series in 2000. In one season in the Pro-Modified division, Edwards won 13 feature races, was named Rookie of the Year, and claimed the Capital Speedway Track Championship. He has numerous NASCAR races.

Secure Carl Edwards for Your Event

Based on your interest in Carl Edwards as a speaker or for a personal appearance, Direct Sportslink has provided you additional links below for other sports talent with similar appearance fees, speaker topics, and categories that match Carl Edwards.