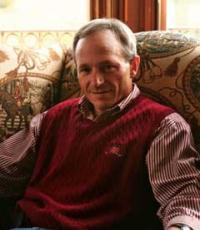 He is inducted into the National Museum of Racing and Hall of Fame; In 1978, he became the youngest jockey to win the Triple Crown on Affirmed
Fee Range: $5,000 - $10,000
Secure Steve Cauthen
for Your Event

Cauthen, the son of a trainer and a farrier, grew up in Walton, Kentucky around horses, which (along with his small size) made jockeying a logical career choice. He rode his first race on May 12, 1976 at Churchill Downs; he finished last, riding King of Swat. He rode his first winner (Red Pipe) less than a week later. His rise to prominence was meteoric; he was the nation's leader in race wins in 1977 with 487, and was selected as Sportsman of the Year by Sports Illustrated. In 1978 he became the youngest jockey to ever win the Triple Crown, riding Affirmed.

He was voted the prestigious George Woolf Memorial Jockey Award in 1984 that honors a rider whose career and personal conduct exemplifies the very best example of participants in the sport of thoroughbred racing.

In the 1980s he moved to England, where jockeys normally compete at higher weights, and became a highly successful rider there. Cauthen was England's champion jockey three times, and won English classic races nine times, including the Two Thousand Guineas, the Epsom Derby twice, and the St. Leger Stakes three times. He also won the Irish Oaks three times and in 1989 rode European Horse of the Year, "Old Vic" to victory in the 1989 French Derby and the Irish Derby. In 1991 he won the Derby Italiano.

After he finished his riding career, he returned to Kentucky. Cauthen was inducted into the National Museum of Racing and Hall of Fame in 1994.

Secure Steve Cauthen for Your Event

Based on your interest in Steve Cauthen as a speaker or for a personal appearance, Direct Sportslink has provided you additional links below for other sports talent with similar appearance fees, speaker topics, and categories that match Steve Cauthen.