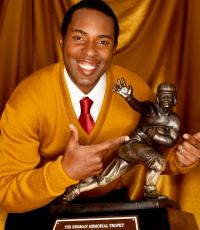 Charlie Ward won the 1993 Heisman Trophy, Maxwell Award, and Davey O'Brien Award as a quarterback for Florida State University, and subsequently led the Seminoles to their first-ever National Championship when FSU defeated Nebraska 18–16 in the 1993 Orange Bowl. He was also the first Heisman winner to play in the NBA. In 1993, Charlie Ward won the James E. Sullivan Award from the Amateur Athletic Union (AAU) as the most outstanding amateur athlete in the United States.

Though Ward did not play baseball in college, he was drafted as a pitcher by the Milwaukee Brewers in the 59th round of the 1993 free agent draft and in the 18th round by the New York Yankees in 1994. An avid tennis player, Ward also shined in the Arthur Ashe Amateur Tennis Tournament in 1994. Ward also played basketball for four years at Florida State University. His 1993 team made it to the Southeast Regional Final where they lost to Kentucky 106–81 with the winner advancing to the Final Four. Ward's 1992 team made the Sweet Sixteen. He made the game-winning shot in its Metro Conference Tournament Championship game win over Louisville in 1991.

Ward was chosen in the 1st round (26th overall) of the 1994 NBA Draft by the New York Knicks. He became a fan favorite in New York for his hard work ethic and unselfish play. During his NBA career, Ward established himself as a good three-point shooter, a reliable ball distributor, and a respected floor leader. Ward was selected to participate in the 1998 NBA All-Star three-point competition, finishing fourth in the event. He soon helped the Knicks reach the 1999 NBA Finals before falling to the San Antonio Spurs. Ward was traded to the Phoenix Suns in February 2004 but spent the remainder of the season with the Spurs and signed a contract with the Houston Rockets the following summer. After maintaining relatively good health over his first decade in the league, injuries caused Ward to miss most of the 2004–05 season. Because of his injuries Ward retired.

In June 2007, Ward was hired as an assistant coach for the varsity boys' basketball team by Westbury Christian School in Houston, Texas having passed on many professional sports opportunities. Ward was previously an assistant coach for the Houston Rockets. In addition, Ward, in November 2007, accepted the job as head coach for the varsity football team at Westbury Christian School, stating that his desire is to help prepare young minds for Christ.

Off the court, Ward became known for his extensive charitable work through groups like the Fellowship of Christian Athletes. In 2011, at the NCAA Final Four, Ward received the John Wooden Keys to Life award given for continued excellence and integrity on and off the court. Ward established The aWard Foundation to enhance the lives of young people through sports based mentoring and educational programs.

Secure Charlie Ward for Your Event

Based on your interest in Charlie Ward as a speaker or for a personal appearance, Direct Sportslink has provided you additional links below for other sports talent with similar appearance fees, speaker topics, and categories that match Charlie Ward.