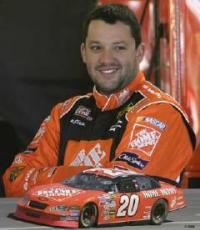 He won the 2002, 2005, and 2011 NASCAR Cup Series Championship
Fee Range: Contact Us
Secure Tony Stewart
for Your Event

As with many NASCAR drivers, Tony Stewart's racing career started with the help of his father. Stewart first got behind the wheel of a race car at the age of seven when his father, Nelson, served as car owner and crew chief of a go-kart team for his son.

In 1989, Stewart graduated to higher horsepower, racing three-quarter midgets before entering the USAC ranks in 1991, where he was named rookie of the year. Three years later, Stewart won the USAC championship after a five-victory season in just 22 starts in the National Midget category. In 1995, Stewart captured the USAC Triple Crown, winning in the National Midget, Sprint and Silver Crown Series in the same season, a feat that hadn't been accomplished before.

Stewart entered the IRL in 1996, winning its rookie of the year award. A year later, he captured the series championship before heading to NASCAR and Joe GIbbs Racing the next year. In 1998, Stewart took the Busch Series by storm, winning three races and rookie of the year honors. He also became the first person to complete the Indianapolis 500 and Coca-Cola 600 on the same day, finishing ninth and fourth, respectively. In 2002, Stewart captured his first Cup title. He considers it his crowning achievement. He repeated this performance in 2005 and again in 2011.

In 2003, Stewart created the Tony Stewart Foundation, which helps to raise and donate funds to help care for chronically ill children.

Secure Tony Stewart for Your Event

Based on your interest in Tony Stewart as a speaker or for a personal appearance, Direct Sportslink has provided you additional links below for other sports talent with similar appearance fees, speaker topics, and categories that match Tony Stewart.