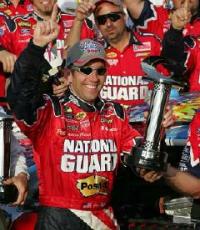 He is a popular NASCAR driver
Fee Range: Contact Us
Secure Greg Biffle
for Your Event

Biffle qualified for the Chase for the second year in a row in 2009. During a January 2009 test, Biffle managed to reach 218 miles per hour in a test for Roush Fenway Racing as part of evading NASCAR's testing ban. This became the fastest time ever achieved on this track by any competitor (amateur or professional).

In 2010 Biffle qualified for the third year in a row for the Chase. He scored 2 wins at Pocono and Kansas. For 2011, Biffle's season improved, thanks in part to the implementation of Ford's new FR9 engine. Biffle missed the chase in 2011 for the first time since 2007.

Biffle's first win of the 2012 season came at Texas Motor Speedway in the Samsung Mobile 500.

Secure Greg Biffle for Your Event

Based on your interest in Greg Biffle as a speaker or for a personal appearance, Direct Sportslink has provided you additional links below for other sports talent with similar appearance fees, speaker topics, and categories that match Greg Biffle.